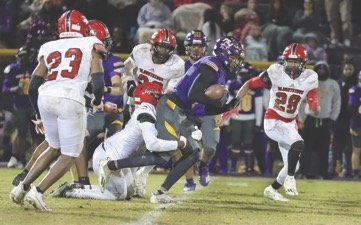 Blountstown Football advances to the Elite Eight with a 14-13 victory over Port St. Joe.  UP NEXT: Class 1R Region 2 Finals @ Sneads.

PORT ST. JOE-The Blountstown Tigers survived and advanced to the Class 1R Region 2 Finals with a win over the Port St. Joe Sharks last Friday night.  It was a night built for football with the temperature dipping in the low 40’s and the fans worked into a frenzy.  Port St. Joe won the coin toss and elected to take the ball on offense first.  It looked like a good decision as the Sharks used a power run game and drove down the field nearing the red zone in just four plays.  On play five, Tiger LB Tristan Jones caused a fumble that was scooped up by Artavius Jones who rumbled 72 yards untouched for the Tiger TD.  Tiger kicker Christian Martinez came in and nailed the extra point to give Blountstown the early 7-0 lead just 2 minutes into the game.  The Sharks would answer with a massive 16 play drive going 66 yards and taking over 9 minutes off the clock.  During the drive, Tiger Elam Johnson caused a fumble inside the 10 yard line but the Sharks would recover the fumble at the 4 yard line and two plays later punch it in for their first score of the night.  The extra point tied the score at 7 as the first quarter ended.
Blountstown would answer on their next possession going 60 yards on 9 plays culminating with a 4 yard TD pass from Josh Pope to Aidan Richards.  The Martinez extra point proved to be the game winner pushing the Tiger lead to 14-7 with 6:54 left in the first half. The Sharks next possession would see their offense commit two penalties that placed them behind the chains and force a punt.  The Tiger offense got a big play with a Jordan Pride run that covered 38 yards placing the ball in the red zone at the Shark 15-yard line. Unfortunately, two plays later an interception in the end zone would end the Tiger threat with 1:55 left to play in the half.  The Sharks would cross midfield and throw 2 long passes into the end zone that fell incomplete.  The half ended with the Tigers in the lead at 14-7.
Blountstown received the second half kickoff but turned the ball over on an interception on the second play of the drive.  The turnover would prove costly as the Sharks went on another long, time-consuming drive.  Starting on their own 17-yard line, Port St. Joe drove 83 yards on 12 plays finishing with a 12 yard pass with 4:36 left in the 3rd quarter.  The extra point attempt sailed right and the Tigers held onto the lead at 14-13.  The Tigers could not answer the score on their next possession and were forced to punt at the start of the 4th quarter.  The Sharks took the ball over and crossed midfield before a fumble caused by Kelvin Anderson was recovered by Elam Johnson.
The Tiger offense could not capitalize on the turnover and had to punt after three downs.  A good punt by Josh Pope would pin the Sharks inside the 20 at their own 18-yard line with 8:34 left in the game.  Port St. Joe steadily moved down the field but a 3rd and 12 pass attempt was knocked down by Jordan Pride at midfield forcing the Sharks to punt with 5:59 to play.  The Shark punt was shanked due to heavy pressure by Ashton Mosely and did not cross the original line of scrimmage. Blountstown took possession of the ball in Shark territory at the 46-yard line.  The Tigers converted a 3rd and 3 with a 20 yard pass completion from Pope to Pride placing the ball into the red zone on the Sharks’s 19 yard line.  On the next play, the Tigers lost possession of the ball on a fumble and the Sharks took over the ball on their own 14-yard line with 4:19 to play in the game.  The Tiger defense stood tall and stuffed a first down run, had a tackle for loss on a pass reception by Bryant Washington and forced two incomplete passes to take the ball back on the Shark 14-yard line with 2:58 left to play.  The Tigers would convert a 3rd and 4 taking the ball to the one-yard line with about 1:30 left to play.  Since the Sharks had exhausted all their timeouts, the Tigers took three straight kneel downs from the victory formation to end the game at 14-13.
The Tigers were the losers on the stat sheet but not the scoreboard as the Sharks ran 23 more plays and outgained the Tigers by 86 total yards.  The Sharks were also +1 in the turnover battle.  The Blountstown offense finished with 171 total yards with 95 on the ground and 76 through the air.  QB Josh Pope finished 6-11 for 76 yards, 1 TD and 2 INT’s.  Elam Johnson carried the ball 10 times for 33 yards.  Amarion Hover touched the ball 8 times for 24 yards.  Jordan Pride finished with 3 catches for 58 yards and a rush for 38.  Aidan Richards had 2 catches for 10 yards including a TD and Artavius Jones had a big catch on a third down play that went for 8 yards.
The Tiger defense held the Sharks to 257 total yards on 59 plays.  Elam Johnson led the Tigers with 11 tackles.  Amarion Hover added 10 total tackles and Kelvin Anderson finished with 9 tackles.  Tristan Jones, Jordan Pride and Ashton Mosely chipped in 8 tackles apiece with Mosely adding a QB sack.   Taiveon Crumitie recorded 2 sacks.
Number 3 seed Blountstown (8-4) advances to the Class 1R Region 2 Finals against number 1 seed Sneads (11-0).  Sneads beat Cottondale 42-8 last week to advance. Sneads brings in the state of Florida’s leading rusher in all classes with Jason Peterson.   Peterson has rushed for nearly 2,500 total yards and averages 226 rushing yards/game and has 35 TD’s on the season.  This will mark the third time Blountstown has faced a top ten rusher in the state as they also faced #4 Kaleb Wagner of Baker and #7 Jamarkus Jefferson of Northview.  There are only eight teams left and the winner will advance to the state semifinals better known as the Final Four.  Game time in Sneads this Friday night will be at 7:00 PM CT.