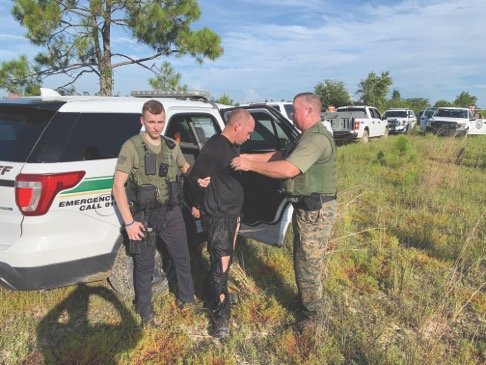 On July 29, 2022, at approximately 4:48 a.m., the Calhoun County Sheriff’s Office received a call for assistance from the Inspector William Dalton with the Inspector General’s Office.  Dalton advised that he has several active cell cameras on the perimeter of the Calhoun Correctional Facility due to the recent drop-offs of contraband.  Drugs, cell phones, cigarettes, etc.. Dalton further advised that he has on camera an individual entering the Correctional Facility property at approximately 4:30 a.m. and exited at approximately  4:43 a.m.

The Calhoun County Sheriff’s Office then provided assistance by responding to the area where the cameras were positioned.  The K-9 team then backtracked from the camera area of the facility to near the car’s position.  The track then led the team in a Southward direction along CR 69S eventually leading the team into a wooded area and continuing approximately 8 miles at which point the subject was apprehended and then identified as being Raymond Arlen Cox.

Cox’s vehicle was then towed to the Calhoun County Sheriff’s Office hanger for processing after Deputies saw illegal drugs in plain view.  While Cox was being detained, he asked about his personal belongings in his car parked across from the prison.

Once at the Calhoun County Jail, Cox was interviewed by Inspector Tracy Burge from the Inspector General’s Office.  In a Post-Miranda interview, Cox admitted to being at the Facility for the purpose of dropping off cigarettes and other contraband.  Cox also admitted that the silver vehicle that was towed was the one that he drove to the prison to drop off the contraband.

Investigator Norris found probable cause to charge Raymond Cox with being in violation of the following F.S.S.Z; 893-135 (1M1) – Trafficking Synthetic Cannabinoids 280 grams or more; 777.04 – Conspiracy to the introduction of Contraband into a Detention Facility.