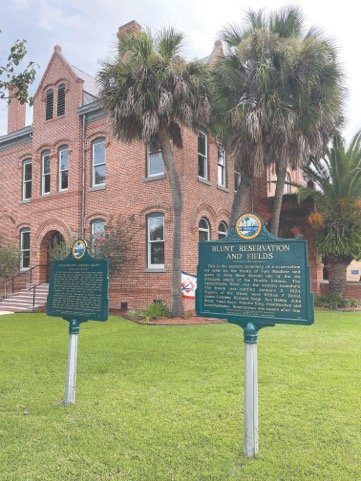 For Tim Fillmon, what started as a two and a half month job to inventory all of the historical markers in the state in 1993, has turned into a full time job.  The trip zig-zagging across the state covered 32,000 miles.  A couple years later, he restored his first marker and has been doing so since then as an independent contractor of the state.

Recently, you may have seen Fillmon around Calhoun County.   He has completed the restoration on the historical markers at the Abe Springs Courthouse, Old Blountstown Courthouse, M&B Railroad, and the two in the above photo.

He does restorations for Hillsborough County, William Bartram Trail, some in Manatee County, City of St. Augustine, and has completed ten from Pensacola.

“So far, I have only done Florida, but I’m trying to expand to other states.  I have Alabama and the Historic Chattahoochee Commission in my sights.  I’ve lost track of how many I’ve done, but it’s around 300”, he stated.

Some are easier to restore than others.  One hit by a car was broken into five pieces.  He welded it back to together and replaced 132 letters.