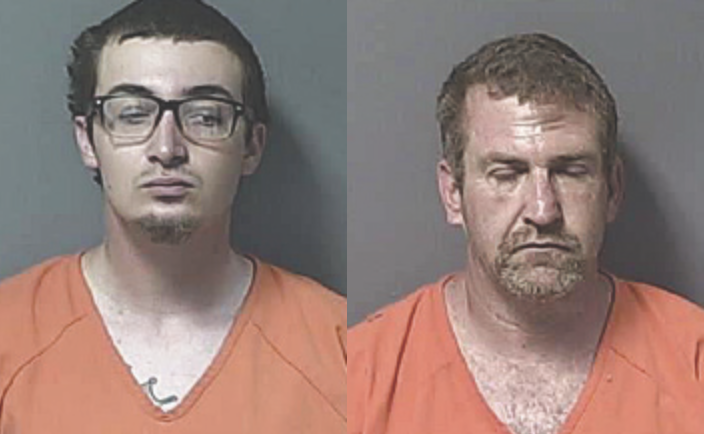 On August 3rd, Deputy Dillard with the Calhoun County Sheriff’s Office reported to Lt. Scheetz, that a 24-year old female had been reported missing in Bay County and that her mother had found her by using the Find My Iphone App.  It had indicated the missing girl was at an address in Clarksville.

The mother had driven from Bay County to the address and encountered her daughter and an adult male subject, later identified as Aaron Chase Hobby, trying to enter a vehicle at the scene.  The mother was able to retrieve her daughter, but not before the father of Chase Hobby, a Stephen Byrd Hobby, came outside threatening the juvenile female’s mother.  The mother and daughter left the scene and contacted the Calhoun County Sheriff’s Office and Deputy Dillard responded.

The mother informed the deputy that she had blocked the car in order to stop Chase Hobby from leaving and that is when the father came outside and threatened her stating that he had guns inside and would go back in and retrieve one to use on her if she didn’t leave.  Chase Hobby fled the scene prior to the arrival of the deputy.

The juvenile, speaking to the deputy in private from her mother, disclosed to the deputy that Chase Hobby was 21 years of age and that he picked her up the previous evening and the two had been having consensual sex.

In the presence of a Crime Victim Advocate and investigators, the 14-year old stated that she met Chase Hobby about a week prior in Bay County.  They exchanged SnapChat codes and began communicating and that they had consensual sex in motel rooms in Jackson County, behind a building, and as recent as the morning of the interview.  The clothing she had on was collected as evidence after new clothes were purchased for her.

She also stated to deputies that Chase Hobby had a baby alligator in his bathtub and there were several firearms inside the home and about mean dogs on the property.

The 14-year-old was then transported to the Gulf Coast Sexual Assault Program in Marianna.  In an interview there, the girl added that Chase Hobby never asked her age, nor did shie ever divulge that she was only 14.  She advised that Chase bought and provided her with Goldshlager cinnamon liqueur.  She also added that she had left clothing items in his bedroom and that there was a belt she left behind in his car.  She also provided that she saved her SnapChat messages between her and Chase so that they wouldn’t be deleted and voluntarily provided deputies with the code to unlock her phone.

Deputy Dillard then transported the girl on a Baker Act to Bay County.  The mother was contacted and gave consent for the phone to be retrieved,along with the passcode and consent to search the phone and SnapChat.

On August 4th, Deputy Scheetz used the passcode and found the SnapChat message history between the 14-year-old and Chase Hobby.  They both described sexual encounters that the two were engaged in and encounters the two both wanted to engage in.

Search warrants were executed on the property and a bra was found in Chase Hobby’s bedroom on the bed.  A baby alligator was found in the bathtub.  Two handguns were located underneath the mattress in Stephen Byrd Hobby’s bedroom that were loaded.  There were four long guns that were hidden behind the hot water heater and were also loaded.

A small female’s belt was found inside the car.

When Chase Hobby was brought into the intervies room, the investigator asked if he knew what he was there to speak to him about and he admitted to having an alligator.  When he used the girl’s name and asked if he knew who she was, he smuggly said no.

Chase Hobby was read his Miranda and he invoked his right to have attorney present.  He was read the DNA Search Warrant and the investigator obtained DNA Buccal Swabs from him.

Based on information obtained, Investigator Scheetz found enough probable  cause existed to charge Aaron Chase Hobby with, Florida Statute 800.04(4)1, Lewd and Lascivious Battery, due to him engaging in sexual activity with a person 12 years of age or older but less than 16 years of age.