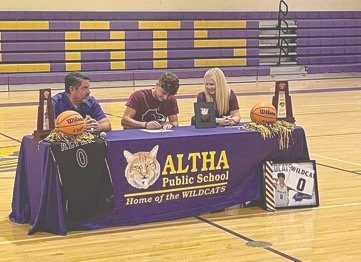 Altha basketball standout Trace Mears has signed a basketball scholarship to Cumberland University in Lebanon, Tennessee.  The signing took place Friday at Altha School with his coach, Jimmy Rogers, and his mother, Deneen Dunn Granger, at his side.

According to his mother, it was a difficult and frustrating process sending video and contacting schools, going to camps and showcases.  “Two hours after telling Trace he needed to make a decision about where he wanted to go to school NOT playing ball, he called me and said Cumberland just called and offered me a $13,000 scholarship to play basketball! I cried for three hours.  God’s plan folks”, she said.

Trace will join five other athletes from Calhoun County enrolled at Cumberland who will help him along the way. Congratulations Trace and continued success.