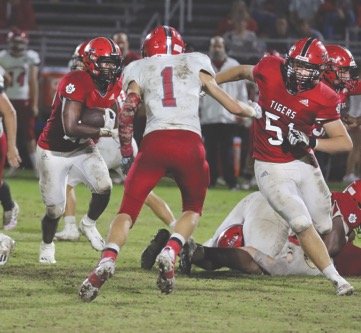 BLOUNTSTOWN-The Blountstown Tigers hosted the Wewahitchka Gators (6-5) last Friday night in the first round of the Class 1R playoffs.  It was all Blountstown as the Tigers cruised to a 42-0 victory.  The Tigers scored 28 points on all their first half possessions starting with a 4 play 62-yard drive.  Elam Johnson scored on a 9-yard run and Christian Martinez came in and kicked the first of his 6 extra points on the night to give the Tigers the early 7-0 lead.
The Tigers scored on their next possession going 78 yards on 6 plays.  That drive was capped off by a Josh Pope to Jordan Pride connection from 37 yards out.
The Tigers third possession of the first half ended in the paint when an 8 play 64-yard drive ended with a Pope to Elam Johnson 25-yard TD pass on a 3rd and 10 conversion.
Blountstown got the ball late in the half with 1:00 minute left and 80  yards to go to the endzone.  After a 15-yard penalty by the Gators, Pope would find J. Pride and complete a 65-yard pass for the Tiger score.  Blountstown took the 28-0 lead into the half.
Blountstown received the ball to open the second half and the offense continued to churn out huge chunks of yardage.  A 50-yard drive took only 4 plays with Amarion Hover crossing the goal line from 37 yards out.  That would move the score to 35-0 and begin the running clock with 10:00 minutes to go in the 3rd quarter.
Wewa would get into the red zone for the first time on the night on their next possession but the defense would get the ball back on a Tristan Jones interception on the Tiger 1 yard line.  It only took 3 plays for the Tigers to go 99 yards with Bryant Washington scoring on a 31-yard run on the first play of the 4th quarter pushing the final score to 42-0.
The Tigers would get one more crack at the scoreboard but failed to move the ball and had to punt for the first time on the night on the last play off the game.
The Tiger offense racked up 432 yards on only 29 plays for an average of 14.9 yards/play.  QB Josh Pope finished 7-9 for 205 yards and 3 TD’s.  Pope also had 1 carry for 24 yards on a QB sneak.  Amarion Hover led the rushing attack with 95 yards on 6 carries.  Elam Johnson added 67 yards on 8 carries including a 25-yard TD reception.  Jordan Pride led all receivers with 5 catches for 176 yards including 2 TD’s.
Blountstown’s defense held Wewa to 140 yards on 41 plays.  LB Amarion Hover led the Tigers with 11 total tackles.  Fellow LB Tristan Jones finished with 6 tackles and an INT.  DT De’Ante Reed also had 6 tackles.  Bryant Washington, Taiveon Crumite and Kelvin Anderson chipped in 5 tackles each.
Number 3 seed Blountstown (7-4) will travel this week to take on the Port St. Joe Sharks (8-2) for the third time this season.  Port St. Joe was on a bye week last week due to their #2 seeding in the region.  St. Joe won the first meeting on their home field back on September 30 by the score of 24-6.  Four weeks later, Blountstown got even with a 42-14 victory to win the SSAC Championship at Bowles field.  We are at the point in the season where the winner advances and the losing team’s season is over.  The winner will advance to the Class 1R Region 2 finals on November 25 the day after Thanksgiving against the Sneads/Cottondale winner.  Game time in Port St. Joe this Friday will be 6:30 CT.