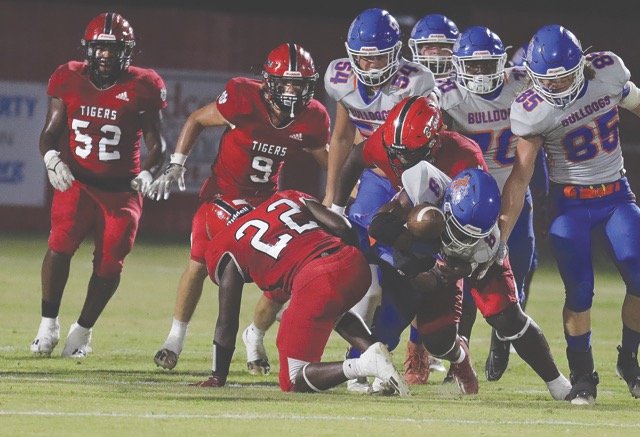 by Michael DeVuyst
BLOUNTSTOWN- The Blountstown Tigers played host to the Taylor County Bulldogs last Friday night.  Taylor County received the opening kickoff and ran 3 plays before Tiger Elam Johnson intercepted a pass to give the Tigers the ball just across midfield.  Blountstown could not take advantage of the gift, giving the ball right back to the Bulldogs via an interception.  Taylor County did take advantage of their turnover marching 58 yards on 4 plays ending with a 43-yard run.  The extra point was missed but Taylor County took the early lead 6-0 halfway through the first quarter.

After swapping possessions, the Tigers lit up their side of the scoreboard at the end of the first quarter.  Blountstown went 48 yards on 5 plays with Amarion Hover finishing the drive from 5 yards out.  Hover added the 2-point conversion, and the Tigers took the lead at 8-6 to end the first quarter.
The second quarter started with a Taylor County punt and the Tigers taking over on their own 35-yard line. Eight straight running plays marched the ball right down the field 65 yards with Hover finishing the drive from 10 yards out. Tristan Jones tacked on the 2-point conversion run and the Tigers opened a 16-6 lead with 4:26 left in the half.
A great kickoff return and a Tiger penalty gave the Bulldogs the ball in Tiger territory at the 28.  Two plays later, an Amarion Hover hit jarred the ball loose and Taiveon Crumitie recovered the fumble giving the Tigers the ball on their own 25-yard line.  The Tigers would cross midfield, but an interception would stop the drive just before the end of the first half.
Blountstown would receive the second half kickoff and looked to put the game away.  Keeping the ball on the ground, Blountstown went 52 yards on 9 plays with Hover entering the paint for the third time on the night from 1 yard out. Elam Johnson added the 2-point conversion run and with 7:05 to go in the third quarter the Tigers added to their lead 22-6.
However, the Bulldogs would not go quietly.  A penalty and miskick by the Tigers gave the Bulldogs some life and the ball in Tiger territory on the 37-yard line.  A converted 4th and 3 and another Tiger penalty gave Taylor County a 1st and Goal on the 7.  Two plays later a 10-yard run scored for the Bulldogs, but the 2-point conversion was stopped by the Tiger defense. Taylor County inched closer at 22-12 with 4:04 to play in the third quarter. The Tigers could not move the ball on their next possession and were forced to punt to start the fourth quarter.
Taylor County would put a scare in the Tiger fans on their next possession.  A 9-play drive travelled 64 yards with a 10 yard pass reaching pay dirt for the Bulldogs.  The Tiger defense stopped the 2-point conversion, but Taylor County closed the deficit to 4 points at 22-18 with 7:25 to play in the game.
The Tigers got the ball and moved it down the field getting some help on a 4th down penalty that kept the drive alive.  Blountstown would reach the Bulldog 26-yard line but lose the ball on downs on an incomplete pass on 4th and 9 giving the Bulldogs the ball back with 3:29 left to play.  Taylor County would convert 2 third downs and cross midfield with 1:30 left to play.  A pass break-up by Elam Johnson on a 4th and 10 would give the Tigers the ball and the win with 1:11 left to play.
The Tiger offense put up 240 yards on 49 plays.  QB Josh Pope finished 1-7 for 9 yards and 2 INT’s.  Amarion Hover led the rushing charge with 22 carries and 123 yards.  Elam Johnson added 80 yards on 12 touches.  Tristan Jones chipped in 20 tough yards on 4 carries.  The lone reception went to Artavius Jones for 9 yards.
The Tiger defense gave up 256 yards on 54 plays.  Amarion Hover led the defense with 13 tackles and caused a fumble.  Elam Johnson and Tristan Jones added 10 tackles each.  De’Ante Reed chipped in 9 tackles with 1.5 QB sacks.
The Tigers (4-1) will go on the road this Friday to Port St. Joe (3-1).  Port St. Joe’s lone loss of the year came against Bay High in week 3 and is coming off a 34-0 victory over Rutherford last week.  Game time in Port St. Joe will be 6:30 CT.