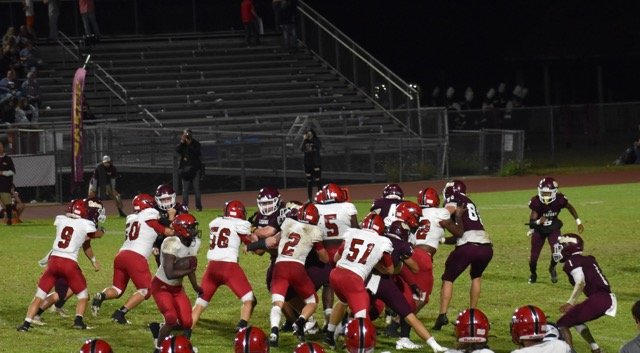 BAKER – The Blountstown Tigers travelled to play the Baker Gators last Friday night. Blountstown got back on the winning track with a 35-0 victory.
The Gators won the toss and wanted the ball first and it was evident that their game plan was to run the ball and take time off the clock.  Baker would pick up one first down, but four plays later be forced to punt.  Blountstown would take over on their own 29 and face a 3rd and 18 after two penalties.  A 20 yard pass completion from QB Josh Pope to Jordan Pride gave the Tigers the first down.  Five plays later, Tristan Jones found smooth sailing 27 yards down the left sideline for the Tigers first score.  Christian Martinez came in and nailed 1 of his 5 extra points on the night as the Tigers took the early 7-0 lead 1:42 to play in the first quarter.
Baker would go three-and-out on their next possession giving the ball back to Blountstown on their 21 yard line.  On the first play, Pope would hit Pride on a 70 yard pass down the right sideline getting into the red zone at the Baker 9 yard line. Two plays later, Amarion Hover bullied his way over the goal line from 5 yards out giving the Tigers the 14-0 lead.  Baker would drive the ball on their next possession and get to the Tiger 14 yard line but lose the ball on downs with 3:46 left in the half. A 48 yard pass from Pope to Elam Johnson moved the ball to the Baker 38 yard line. After two runs, Pope would hit Artavius Jones on a 25 yard pass for another Tiger score with just over a minute to play in the half.  The Tigers took the 21-0 lead into halftime.

Blountstown would receive the second half kickoff and start their next drive at midfield after a 20 yard return by Aidan Richards.  A 25 yard run by Tristan King and a Pope to Pride pass put the ball on the Baker 14 yard line.  On the next play, Amarion Hover would reach the paint for the second time on the night giving the Tigers the 28-0 lead with 10:31 to play in the 3rd quarter.
The Tiger defense would force another three-and-out giving the Tiger offense the ball on their own 44 yard line.  Four runs by Elam Johnson mixed with a Richards reception and a face mask penalty placed the ball on the Baker 3 yard line.  Johnson would finish the drive with a run and the 35-0 lead would start the clock running with 3:30 left in the third quarter.  The fourth quarter went quickly and scoreless with the Tigers finishing on top 35-0.
The Tiger offense finished with 365 yards on the night running 36 plays for an average of 11.8 yards/play.  QB Josh Pope was 7-7 on the night for 184 yards and 1 TD.  Elam Johnson carried the ball 8 times for 57 yards and had one catch for 48 yards.  Amarion Hover added 36 yards on 6 carries.  Kelvin Anderson and Tristan Jones chipped in 31 yards each.  WR Jordan Pride finished with 4 catches for 100 yards.  Artavius Jones added a 25 yard TD catch with Aidan Richards finishing with 1 catch for 11 yards.
The Tiger defense was stout all night long giving up only 101 yards on 31 plays. Amarion Hover led the Tigers with 11 tackles.  De’Ante Reed added 8 tackles with Tristan Jones and Elam Johnson adding 7 and 6 tackles each.
Blountstown (5-3) will travel to Walton County (5-2) this Friday night. Walton won 5 straight to open the season but have lost their last two games including a 35-6 loss to Pensacola Catholic last Friday.  Game time in DeFuniak Springs will be 7:00.