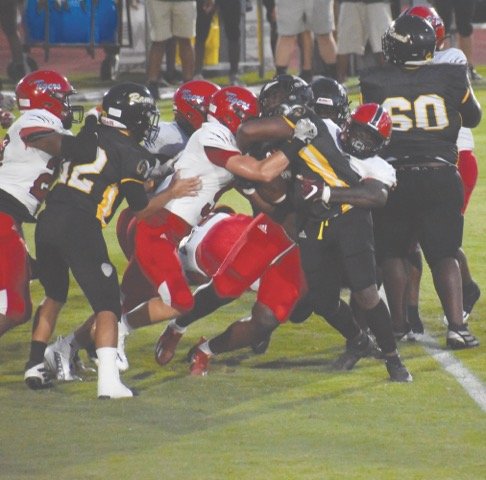 by Michael DeVuyst
PANAMA CITY-The Blountstown Tigers travelled to Tommy Oliver Stadium in Panama City last Thursday and came home with a 33-6 victory over the Class 2S Rutherford Rams.  The Rams took the opening kickoff and gained two first downs before throwing an interception to Artavious Jones that was returned inside the Ram 15-yard line.
However, Jones had the ball stripped during the tackle and gave the ball right back to the Rutherford.  The Rams would gain 2 first downs and reach midfield before being forced to punt.  The Tigers received the ball on their own 17-yard line and proceeded to go on an 8 play drive scoring on a Josh Pope 1 yard run on the first play of the 2nd quarter. Tristan Jones ran in the 2-point conversion for the Tigers 8-0 lead.
The Rams got the ball back and ate up 6 minutes of clock before a forced fumble by Ashton Mosely was recovered by Jayce Copeland giving the Tigers the ball inside Rutherford territory at the 48. Three plays later, Amarion Hover punched the ball across the goal line from 3 yards out giving the Tigers the 13-0 lead with 5:52 left in the first half.  Another turnover by the Rams would set the Tigers up in good field position.  Aidan Richards intercepted a pass and returned it 31 yards to the Ram 28-yard line.  Four plays later, Hover entered the paint from 5 yards with Pope adding the XP giving the Tigers the 20-0 halftime lead.
A botched onside kick attempt by the Rams opened the second half giving the Tigers the ball on the Rutherford 37-yard line.  Six plays later, Pope would find a wide-open T. Jones in the right flat for 7 yards and the Tiger 26-0 lead.  Three punts in a row would give the Tigers the ball back late in the 3rd quarter.  A 9 play 69-yard drive moved into the fourth quarter with Elam Johnson scoring on a 17-yard run with 9:42 left in the game giving the Tigers the 33-0 lead.  With the large lead the Tiger Cubs entered the game for some much needed reps and experience.  Rutherford would score late in the 4th quarter finishing off a 12-play drive with a 7-yard run and the final score of 33-6.
The Tiger offense ran 40 plays and gained 306 yards for a 7.7 yards/play average. QB Josh Pope finished 5-8 for 43 yards with 1 TD.  Amarion Hover led the rushing attack with 109 yards on 9 carries.  Elam Johnson and Tristan Jones each had 7 touches with Johnson going for 72 yards and Jones churning out 46 yards.  T. Jones also had 2 receptions for 17 yards including 1 TD.
The Tiger defense was on the field for 51 plays giving up 164 total yards.  Amarion Hover led the charge with 15 tackles.  T. Jones added 8 tackles with Bryant Washington and A. Jones chipping in 6 tackles each. Ashton Mosely, De’Ante Reed, Taiveon Crumitie and Kelvin Anderson finished with 5 tackles apiece.
Blountstown (2-0) will travel to Class 2S Marianna (0-2) this Friday night.  Marianna lost to North Florida Christian last week 21-7.  Game time in Marianna 7:00 PM CT.