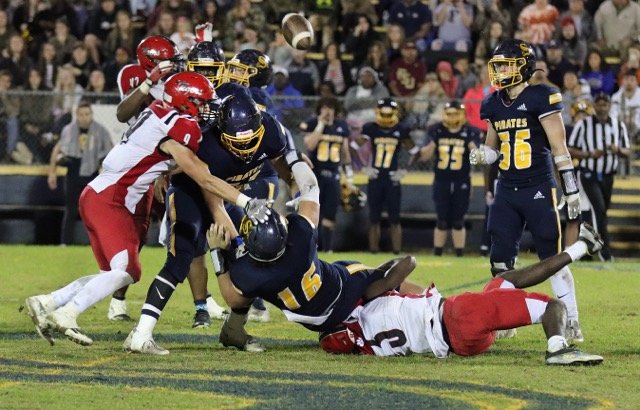 Tigers are in the Final Four Defeats Sneads 49-14; face No. 1 Hawthorn

SNEADS-The Blountstown Tigers travelled to play the #1 seed in Region 2 in the undefeated Sneads Pirates last Friday night for a chance to advance to the state Class 1R semifinals with a victory.  After the dust was settled the Tigers came away with the 49-14 victory.
The game was tight in the first half with the Pirates striking first.  Sneads scored on a three play 57 yard drive with the states leading rusher Jason Patterson running it in from 43 yards out.   Sneads attempt at the 2-point conversion was stopped by Kelvin Anderson but the Pirates took the early 6-0 lead just 1:30 minutes into the game.  Blountstown would answer on the ensuing kickoff with a Jordan Pride 59 yard kickoff return.  Tiger kicker Christian Martinez came in and nailed his first of seven extra points on the night and the Tigers took the lead at 7-6.
Sneads stumbled on their next possession with a holding penalty and two incomplete passes and were forced to punt.  Tiger punt returner Elam Johnson put the Tigers in good field position with a 45 yard return setting up the Tiger offense in Pirate territory on the 40 yard line.  Five plays later, Johnson scored on a 5 yard run putting the Tigers up 14-6 with 4:36 left in the 1st quarter.
On Sneads next possession, a forced fumble by Tiger DT De’Ante Reed was recovered by Johnson and the Tigers were in Pirate territory again at the Sneads 38.  A Josh Pope to Jordan Pride pass moved the ball to the 10 yard line giving the Tigers a 1st and goal at the 10.  Two penalties by the Tigers and a tackle for loss ended the drive losing the ball on downs. Sneads took the ball over on their own 12 yard line and would go 88 yards on 7 plays with Patterson running it in from 46 yards out.  The 2-point pass was converted tying the game at 14 with 9:54 to play in the first half.
The Tigers would get back on top quickly on their next possession with a 2 play 53 yard drive with a Pope to Pride TD strike that covered 51 yards.  That score put the Tigers up 21-14.
Sneads went three-and-out on their next possession and was forced to punt.  The Tigers would march into the red zone but give up the ball on downs as a 4th and 2 pass from the 9 yard line fell incomplete in the endzone with 2:46 left in the half.  Sneads took the ball over and would move the ball to midfield but the half would end with a Bryant Washington interception on the last play of the half with the Tigers in the lead 21-14.
The Tigers received the second half kickoff but could not move the ball and were forced to punt. Sneads would get a big run by Patterson and move across midfield but eventually give the ball up on downs on the Tiger 33 yard line with a 4th down stop by Yanti Miller and Kelvin Anderson.
Three plays later the Tigers would open the flood gates and extend their lead to 28-14 with an Elam Johnson 46 yard run.  Sneads went three-and-out on their next possession and the Tigers would strike quickly again with another three play drive going 59 yards finished off by an Amarion Hover 7 yard run.  Blountstown led 35-14 with 3:40 left to play in the 3rd quarter.  Sneads high powered offense would be stopped again with a three-and-out giving the ball back to the Tigers on their own 45 yard line.  A few big runs by Hover would move the ball to the 1 yard line where Artavius Jones took the last play of the drive into the paint pushing the Tiger lead to 42-14 with 8:40 left to play in the game.  The Tigers would get on the scoreboard on the next Sneads possession with a 5 yard interception return for a TD by Jamarion Engram and the mercy rule would be in effect the rest of the way with 8:08 left to play with the Tigers in the lead at 49-14.
The Tiger offense churned out 345 yards on 35 plays, scored on 7 of 9 possessions and most importantly did not turn the ball over. Tiger QB Josh Pope finished 9-12 for 137 yards and a TD.  Elam Johnson led the rushing attack with 115 yards on 9 carries.  Amarion Hover added 95 yards on 12 carries.  Jordan Pride led all receivers with 5 catches for 86 yards.
The Blountstown defense allowed 245 total yards with Jason Patterson accounting for 223 yards on the ground.  Most of that was in the first half as the Pirates only achieved two first downs in the second half and one of those was by a penalty.  The Tiger defense was also +3 in the turnover ratio.  Elam Johnson led the defense with 12 tackles, a caused fumble and a fumble recovery.  Artavius Jones finished with 9 tackles.  Tristan Jones and Ashton Mosley chipped in 8 tackles each.
Overall #4 seed Blountstown (9-4) advances to play the #1 seed Hawthorne Hornets (10-0).  Hawthorne won a close game against Pahokee 21-20 last week to advance.  Hawthorne has been in the last two championship games losing both times once to Baker and once to Madison County.  The other semifinal game will pit #2 Northview against #3 Union County.  The Tigers will travel to Hawthorne (just east of Gainesville) on Friday, December 2nd with the game starting at 6:30 CT.by Michael DeVuyst