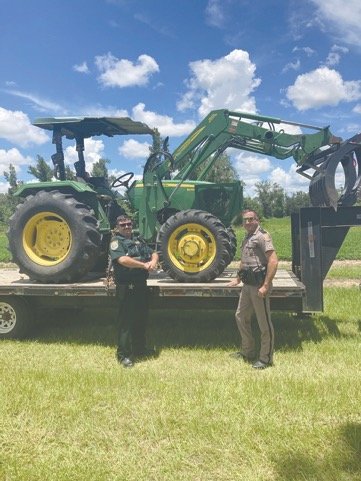 Trooper and Deputy team up to recover tractor 

During the investigation, both the Trooper and the Deputy were able to obtain a description of the suspect’s vehicle along with the possible suspect’s  identification.  After several hours, law enforcement was granted permission from a property owner in Jackson County to enter the property that the suspect had ties to.  Law Enforcement located a seed spreader that was stolen with the tractor.  It appeared the suspect had loaded the tractor back up on a trailer and left with the tractor after disconnecting the seed spreader.

On July 17, 2022, the same Trooper was informed that the suspect was possibly in Alabama with the stolen tractor.  A short time later the Trooper located the suspect along with the tractor in Jackson  County.  The suspect was taken into custody without incident and the tractor was returned to the owner.  The working relationship between the Florida Highway Patrol and the Calhoun County Sheriff’s Office is to be credited for returning the stolen items to the rightful owner, making the arrest and assessing the charges.  It is always nice when you can solve a crime and hold someone accountable in a swift manner.

Arrested and charged by the Florida Highway Patrol was William Alan Smith (aka) Billy Smith, Marianna, Florida, 63 years of age,  of Grand  Theft of a motor vehicle and tampering with evidence.