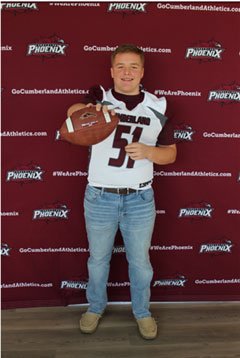 The Blountstown Tigers’ three year starting center Brody Hall has committed to play football for Cumberland University in Lebanon, Tennessee according to BHS Head Coach Beau Johnson.
“Brody is a 4.0 student, a leader at his church (Blountstown First Baptist) and a leader on our team,” coach Johnson stated.

Brody had started at center the last three years and was moved to tackle due to injury this season and was recruited by Cumberland as a center.

Brody was a very important player on our 2019 State Runnerup team and will be joining former Tiger Alex Valdez on the Phoenix roster.

Brody is the son of Traci and Jim Hall of Blountstown.