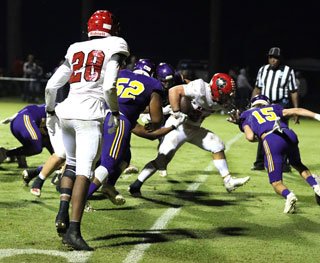 Tigers advance with a 29-12 victory over Port St. Joe. Tigers to host Sneads this Friday night.

PORT ST. JOE- The Blountstown Tigers travelled to Port St. Joe last Friday night for the first round of the FHSAA Class A Football State Playoffs. The game marked the long-time rivals first match-up of the season as an earlier game scheduled this year was cancelled due to COVID-19 concerns.

The Tiger defense jumped started the offense when Garrett Martin forced a fumble recovered by Mikis Engram midway through the 2nd quarter setting up the offense on their own 31 yard line. Six running plays later the field was flipped to the Shark 31 facing a 3rd and 6. Tiger QB Logan Pumphrey hit Jarian Mosely for 27 yards taking the ball down to the 4 yard line and on the next play Garrett Martin put the first points on the board with a 4 yard run. Martin also added the 2-point conversion run and Blountstown took the 8-0 lead with 1:24 left in the first half.

Back-to-back punts opened-up the second half but after that the Tiger offense started to churn out large chunks of yardage on the ground. Runs by Engram and G. Martin got the ball down to the 6-yard line and Martin would finish the drive with a 6 yard run. Trace Horne tacked on the extra point giving the Tigers the 15-0 lead with 5:46 to go in the 3rd quarter.

The fourth quarter started with a Tiger punt and Port St. Joe would start a long scoring drive. The Sharks went 58 yards on 12 plays converting on two 4th downs including the last play of the drive that was a 4th and goal from the Tiger 15 yard line. The Sharks completed the 15 yard pass to put their first points on the board with 8:19 left in the game. The 2-point conversion pass fell incomplete, but the Sharks trimmed their deficit to 15-6.

The Tiger offense would answer with back to back scores to eliminate any chance of a comeback. Blountstown went 52 yards on 6 plays mostly on the legs of G. Martin. Martin would finish the drive on a 15-yard run, punishing would-be defenders on his way to the goal line. The 2-point run attempt failed but Blountstown pushed their lead to 21-6 with 5:09 to play.

Two plays after the Tiger TD, the Blountstown defense got the ball right back with a Deterryan Murphy interception on the Shark 31yard line. Six plays later, Mikis Engram punched the ball in the end zone with a 15 yard run. Engram added the 2-point conversion giving the Tigers the 29-6 lead with 2:21 left in the game.

Port St. Joe would add a final score with a 7 yard QB scramble with 1 second to play but the damage was done and the Tigers walked away with the 29-12 victory.

Garrett Martin led the Tiger offense with 116 yards on 17 carries. Martin put 20 points on the scoreboard with 3 rushing TD’s and a 2-point conversion. Mikis Engram added 8 points with a rushing TD and 2-point conversion adding 54 yards on 8 carries. Ken Speights chipped in 34 yards on 10 carries before leaving the game with an injury. QB Logan Pumphrey went 2-6 passing for 37 yards with receptions going to Mosley and Kaiden Hatchett. 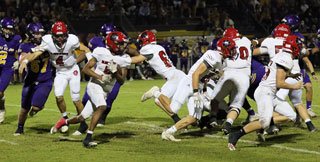 Blountstown (4-3) advances to play Sneads (7-2) in the Class A Region 2 Semifinals. Blountstown and Sneads played in Sneads back on October 2nd with Blountstown squeaking out a 20-17 win. Sneads beat Liberty County last week to advance 44-14. The winner will advance to the elite eight and the loser’s season will be over. Game time in Blountstown this Friday night will be 7:30 CT. 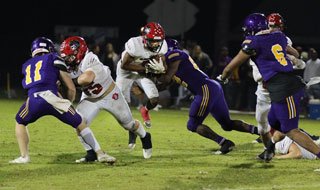